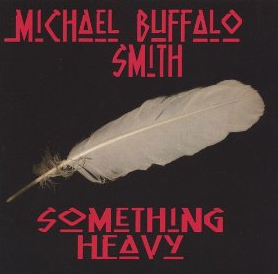 Add to cart   $10.00
Something Heavy, was released on June 24, 2005 on the artist's birthday. It is Smith's fifth album in a twelve-year period. The CD was released on Mill Kids Records, an indie label in Huntsville, Alabama. Smith was once again backed by the excellent band The Crawlers, who were also based in Huntsville, and included red hot guitar picker Ray Brand (RIP); drummer/producer/engineer Billy Teichmiller; bassist Owen Brown; guitarist John Huber; and harp man Thad Usery.  Guests included Nashville singer/songwriter (and founding member of The Marshall Tucker Band) George McCorkle (RIP); Muscle Shoals guitar legend Pete Carr (his signature leads can be heard on "Main Street" by Bob Seger and "Tonight's The Night" by Rod Stewart, just to name a couple); JoJo Billingsley (RIP), one of the original Lynyrd Skynyrd backup ensemble The Honkettes who sang with the late Ronnie Van Zant; John D. Wyker (RIP), leader of the early '70's charting band Sailcat; multi-instrumentalist Danny Hall, singer Rodeo Jan and keyboard guru Larry Perkins. Something Heavy begins with a rocking tune written by Wyker and Tommy Talton  called "Hard Drivin' Man," an ode to truckers, bikers and musicians that features the slippery slide guitar of Ray Brand. Next is the title track, "Something Heavy," penned by the late Eddie Hinton, a swampy blues with some Danny Hall acoustic that will get your mojo a workin.' There is a country-rock rendition of the Meat Loaf hit "Two Out of Three Ain't Bad," and another Smith original, "Redneckin," quite possibly the new theme song of blue collar Southerners everywhere. The album is rich with variety, all tied together by the powerful voice of a Southern man with a whole lot of soul.

A white feather, stark against black on the cover, seems set to fly in the face of the title Something Heavy. But I'll bet Michael Buffalo Smith thought "profound" more than contrasts when he named his new album for the song he covers flawlessly-a great song by the late, great southern raconteur, Eddie Hinton. There's a prideful embrace of all forms of southern music-particularly southern rock-with every spin of Smith's records. The music is profound, so in that sense "heavy" describes it well. His last album, 2002's Southern Lights, proved he's an exceptional torchbearer and the lights are in no way dimmed here. These are sparkling, wide-ranging new songs and covers, all perfectly suited to Smith's personality and mission. He sings them in a clear, robust voice and as usual, a few "heavy" friends aid and abet his excellent band, The Crawlers. "Redneckin'" is pure good ol' boy fun, the guitars of George McCorkle, Pete Carr, Danny Hall, and Ray Brand (who sadly recently passed on) turning it into quite a twang-fest. Rodeo Jan Elkins and Jo Jo Billingsley (of Skynyrd fame) help sing the sweet gospel on "Chapel of Ease." Seemingly meant as an interlude, this song stands out tall. "Jack Daniels if You Please" is great outlaw country, but my favorite is the Marshall Tucker-like "Everyday Grind," where Mr. McCorkle's succinct solos delightfully recall his days in that primo group. Memories do pop up in listening to this fine album, but fresh ones are made, too. Smith has much to be proud of.

Two years after his last effort, our friend from Gritz Magazine, Michael Buffalo Smith, is back on the scene with his fifth album. As with his last one, it was recorded in Huntsville, Alabama with his great buddies, the Crawlers, the band that features the extraordinary and too much unknown guitar and slide guitar player, the great Ray Brand. For the recording, Michael was fortunate to work a lot some great musicians. Just to name a few, he had George Mc Corkle, from the Marshall Tucker Band, in the studio. He also had Pete Carr, a great guitar player who used to play with Duane Allman. Jo Jo Billingsley from Lynyrd Skynyrd was also there to record vocals (Jo Jo was recently seen on stage with the Saturday Night Special band, playing with Ed King, Artimus Pyle.) There are also rumours about her working on a solo album. Needless to say that's a great bunch of people to work with.The result is a great album mixing all of Michael's influences, going from country rock to gospel music, with bluesy, southern and acoustic atmospheres (listen to the beautiful 'Yard Sale Man". The album features great vocal harmonies, great slide work and real nice guitar harmonies ala Allman Brothers ("Rocket City Express"). Another surprise is Michael's voice. I had never realized how deep and rich his voice was. This is a great album (I really like his last album but, to me, this is the best work yet from Michael), which sounds more country rock than Southern rock. Congrats for your work Michael, and we're still waiting for you to tour in Europe !