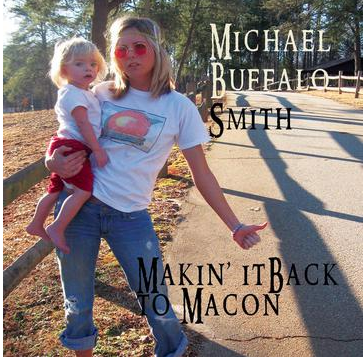 Makin it Back to Macon (Dreaming Buffalo, 2018)

This album has been over ten years in the making. Well, not the actual making, but the planning, says South Carolina recording artist Michael Buffalo Smith.  My last album, Something Heavy, was recorded and released in 2005. For those keeping score at home, that’s thirteen years ago. As far back as 2006 I was planning to do a new record, but as they say, “life got in the way.” I had written the title track, mostly, and I had a vision of the album being produced by the great Paul Hornsby, the Capricorn Records guru who produced all of the hit albums by hometown heroes The Marshall Tucker Band, along with albums for The Charlie Daniels Band, Wet Willie and many others from my pool of heroes. I didn’t even know Paul at the time. I had interviewed him for my Gritz magazine, but it would be several more years and a couple of more interviews before I actually started feeling like he was my friend. Now I am in the middle of working with him on his biography. How cool is that?

I also dreamed of asking some of the old Capricorn and other Southern Rock artists to do guest spots of the record. The first one I wanted to ask was founding Cowboy member (and one of my favorite singer/songwriter/guitarists) Tommy Talton. After one of his gigs at the Melting Point in Athens in about 2008, I just came out and asked him. I even told him about the blues song and my idea of just having him play some old-school Robert Johnson type slide and me singing, maybe one of us stomping a foot. To my surprise, he agreed.  Flash forward ten-plus years and my “dream” album is done, with Hornsby producing and playing piano and Talton doing some mighty fine guitar work.

Some of my other dreams did not make the cut. I had asked my buddy Jakson Spires (Blackfoot) about playing drums on a song or two and he was all in, but sadly he passed away. I also had commitments from Marshall Tucker Band guitarist George McCorkle (who played on my previous album) as well as two members of Grinderswitch, Dru Lombar and Larry Howard, as well as Tommy Crain (Charlie Daniels Band) who played all over my 2003 release Southern Lights, all of whom we lost far too early.

I did manage to be blessed with some fine musicians for the sessions, including my long-time band mate from the Buffalo Hut Coalition, Greg Yeary, a great guitarist who also wrote one of the songs and co-wrote another; Joey Parrish and Daniel Jackson of The Silver Travis Band and Towson “Lefty” Engsberg on drums, who was a member of the late Tommy Crain’s band The Crosstown Allstars (And still is. The band kept playing following the death of Tommy); Austin, Texas honky-tonker Billy Eli (who recently co-produced my EP The Austin Sessions); and the magnificent Georgia Songbird herself, E.G. Kight on backing vocals. Add to that the magical piano work of my producer Paul Hornsby, and we had quite a nice group pf players. I was, and am, honored. On day one, we wound up without a bass player, and a Macon bassist named Hal Brandstetter kindly played bass on the first track.

While I brought the songs to the table, the recording was a group effort, with ideas and input from everyone and all of us deferring to Paul Hornsby for the final decisions. As it should be.

As an interesting aside, the cover photo for the album features my stepdaughter, Hannah Greene and my first-born grandchild, Zoe. As I mentioned earlier, I was planning to do this album ten years ago, and that included the cover idea. My late wife, Jill McLane counted photography among her many talents. She had shot the cover photos for three of my previous albums as well as hundreds of photos to accompany articles I had written for magazines. In 2008, she took Hannah and Zoe to a backroad location and shot a series of photos with her digital camera. Several months ago, I came to the somewhat startling realization that I didn’t have any idea where those photo files were. I remember backing them up a few different ways, including on CD, but no matter how hard I looked, the files were nowhere to be found. I had given up and was going to reshoot with another model. We were over halfway finished with the recording when a random search of my computer for something totally different lead me to a folder marked with a date in 2008. That’s all. I opened it to find all of the Hannah photos. Some call it luck. I call it a blessing.