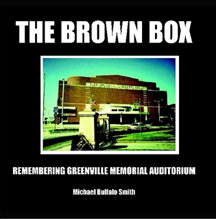 $15.00
Add to cart
This is the history of Greenville, South Carolina's Memorial Auditorium, a venue that, although it was closed and imploded in the early '90's, still holds a lot of happy memories for many people. It was the home of Monday night wrestling and the site of many outstanding concerts including the final performance by the original Lynyrd Skynyrd band. We spoke to the fans, the stars and the employees for this little labor of love. Loads of info on the 60's folk scene provided by Paul Surratt (Gram Parsons), an exclusive telling of the night the plane crashed by Artimus Pyle of Lynyrd Skynyrd, loads of Mid Atlantic wrestling stories and stats and an entire chapter on the rock band KISS and their history at the auditorium. Rare photos!