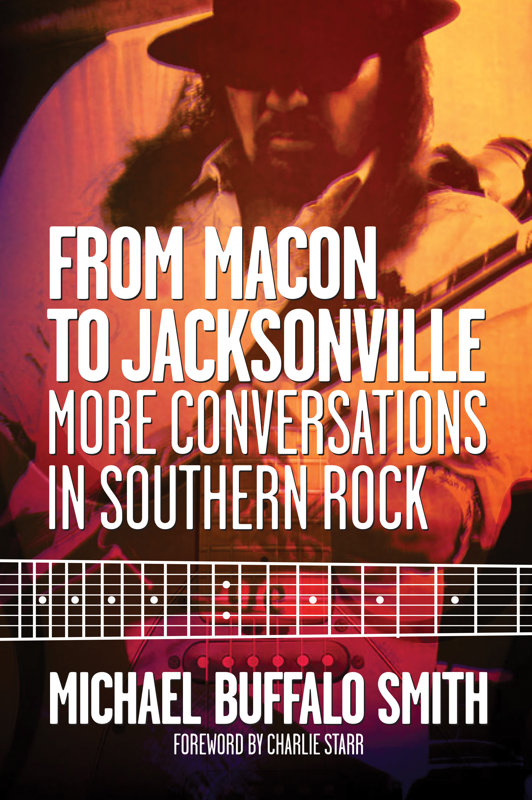 FROM MACON TO JACKSONVILLE is the follow up to CAPRICORN RISING by author Michael Buffalo Smith. While CAPRICORN RISING collected over twenty years of interviews with the many stars that came out of Macon, Georgia's Capricorn Records during the 1970s, FROM MACON TO JACKSONVILLE features in-depth interviews with many more of the stars that came out of Florida, Georgia, and the Carolinas during the hey-day of Southern Rock.

The foreword is by Charlie Starr of Blackberry Smoke.

Since I started reading Buffalo's latest book, I can't seem to get anything done. I can't put it down. FROM MACON TO JACKSONVILLE is full of life stories straight from the mouths of your favorite Southern Rockers. --Paul Hornsby, producer and musician at Muscadine Studios, Macon, GeorgiaOnce again, as in his critically acclaimed CAPRICORN RISING, Michael Buffalo Smith captures the true essence of Southern Rock in this new book, FROM MACON TO JACKSONVILLE. A great read! --Willie Perkins, author and former tour manager for The Allman Brothers BandMichael Buffalo Smith has been a long-time friend, and I can say unequivocally that he has more knowledge of the history of Southern Rock than anyone I know. --Chuck Leavell, pianist/keyboardist for The Rolling Stones, The Allman Brothers Band, and Sea LevelMichael Buffalo Smith is truly the "keeper of the flame!" He has always honored the great Southern way to play and has presented us players, writers, and fans in an honest (warts and all) loving and human way. I was so honored to have been chosen to grace the second ever hard-copy cover of Gritz magazine! Thanks Michael. As the late, great Gregg Allman always put it: "Don't forget to boogie, baby!" --Bonnie Bramlett, songwriter/recording artist; co-leader of Delaney & Bonnie & FriendsMichael Buffalo Smith writes of what he knows and what he loves; those who share in that love him. --Henry Paul, singer/songwriter; and member of OutlawsMichael Buffalo Smith was a highly respected friend of my brother, Tommy Crain. He is a good man and a straight shooter. --Billy Crain, songwriter/musician; and member of the Henry Paul Band and OutlawsMichael Buffalo Smith is one of the biggest Southern music followers and supporters. As a writer, musician, and publisher, he has dedicated his life to promoting this music. Michael was my favorite interviewer--one reason is because he has great knowledge of the subject. His two latest books are FROM MACON TO JACKSONVILLE and CAPRICORN RISING, and I highly recommend both if you have an interest in music from the South. --Alan Walden, former manager of Lynyrd Skynyrd and Outlaws; 2003 Inductee, Georgia Music Hall of Fame